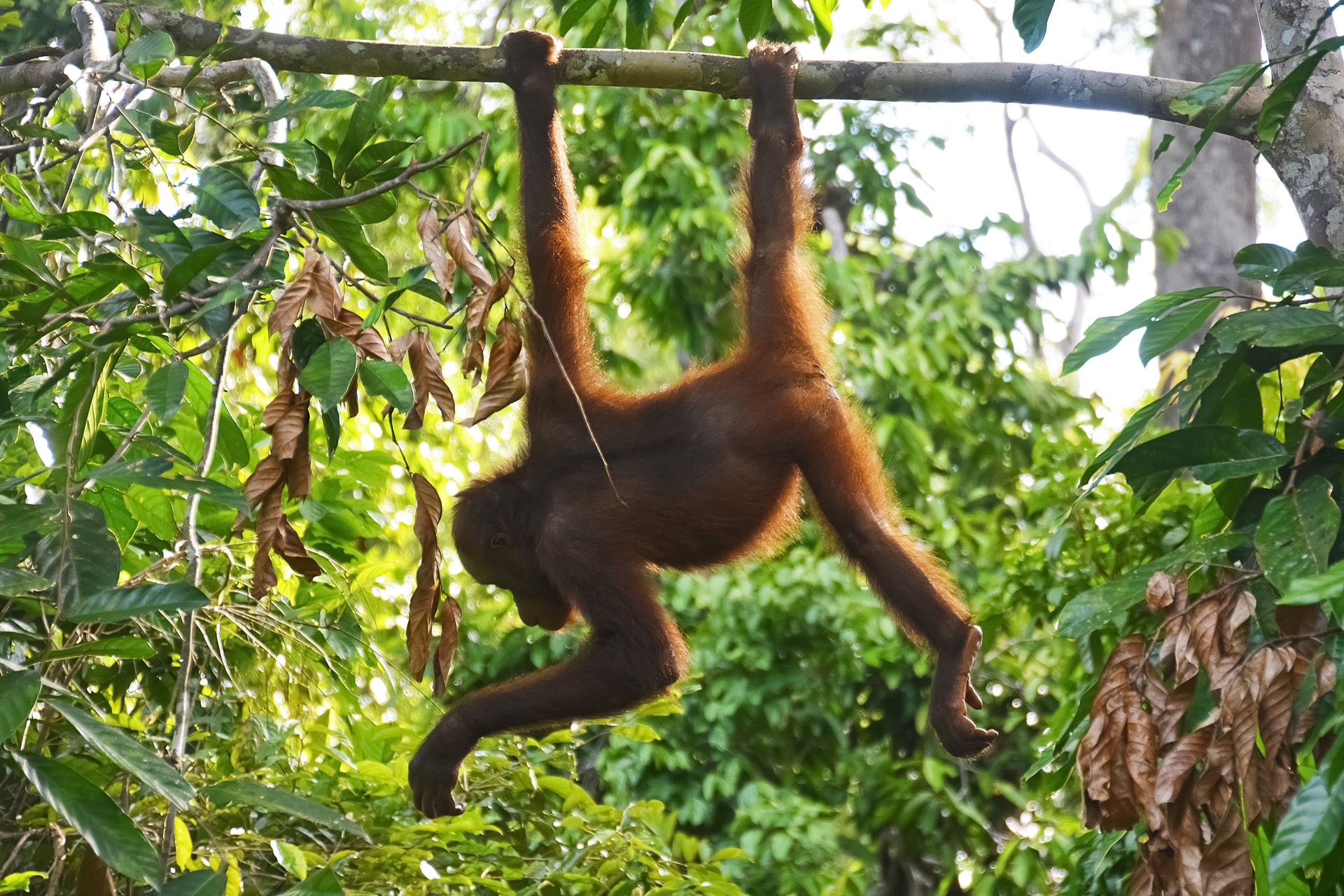 People of the Forest Orangutans

Hiking through the ancient 100-million-year-old forest of Danum Valley, Borneo, I get a sense of what it must have been like eons ago. Cicadas and other insect sounds permeate the air. We spot a pair of gibbons brachiating (swinging by their arms) toward us from 200 yards away. But before we can focus our cameras, they are past us, displaying incredible agility, grace, speed and endurance. And finally we spot the red ape —the person of the forest —the orangutan.

Watching my first sighting of orangutans in the wild was fascinating and awe-inspiring. We observed a mother with a baby forage in the canopy. She was so deliberate in her movements, with a distinct strategy for moving from one tree to the next: lean toward the direction you want to go so the branch bends enough in order to grab a branch in the next tree; then reach out with one leg to bring the branches closer together; and finally lean into the new branch and sway into the tree. It’s like aerial acrobatics 100 feet and higher in the air.

Old local legends say that “orang hutan”—which means “people of the forest” in Malay—were once humans who went off to live in the forests to avoid work or conflict. They are said to have climbed up into the trees to live above humankind, choosing not to speak so they would not be enslaved. It is thought that local people came into contact with orangutans and construed that these human-like beings were a kind of “person.”

Marc Ancrenaz, a wildlife veterinarian who co-founded the organization HUTAN to better understand what is needed to sustain orangutan in the 21st century. Marc has studied and followed wild orangutans in Sabah, Borneo since 1998.

"After all these years spent studying orangutans, I still think that we know so little about them” said Ancrenaz. "I feel about orangutans what I've never felt about any other animal."

Orangutans have the longest span of time between births of any mammal—more than eight years. They have just one offspring at a time, and don’t reach sexual maturity until at least 15 years old. That amounts to very slow population growth and one reason their numbers continue to decline amidst habitat loss and direct killings.

Deforestation, plantation development and killing wildlife in conflict situations often go together. HUTAN has been focusing their work around Kinabatangan, a river which connects the highlands to the mangroves. The river supports a variety of ecosystems but only approximately 10% of it remains as forest, much having been converted to palm oil plantations. Still, many animals large and small, including orangutans and elephants, are found in what remains of the lowland forest areas.

Marc and his team have made some important discoveries. Orangutans can and do survive in disturbed forests exploited for timber. More surprisingly, they have also learned to survive in forest fragments isolated in oil palm plantations and in reforested areas. The orangutans are making what they have left work. HUTAN is working to protect these fragments and establish corridors so animals can safely move between them. The key for sustaining this species appears to be to create more protected areas and to develop ways for people to coexist peacefully in agricultural landscapes with their shy, red cousin. The more Mission Wildlife can do to support the work of Marc, HUTAN and others, the better for orangutans and their young to continue to sway and forage in the wild.

Want to make a donation?

You can make a difference